It’s amazing how quickly flying your drone can go from fun to disappointment. The good news is, it’s easy to get that drone repaired at 208 LifeLine Repairs! You can schedule an appointment, come to the store, or mail in your device for a free diagnosis, reliable repair, and quick turnaround.

208 LifeLine Repairs will handle the repair process from start to finish. Our repairs are backed by a 120-day warranty, so if there is an issue during the warranty period, just return your device and we’ll work to rectify the issue. 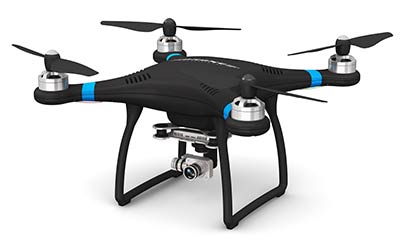 It’s usually a matter of when (not if) your drone will need repair because there are so many things that can go wrong. At 208 LifeLine Repairs, we pride ourselves in being able to fix all kinds of drones including the Phantom 2/3/4 (Standard, Advanced, Pro), Mavic, Spark, or Inspire. Please call to inquire about other drones.

Here are some common alternative names for drones:

Quadcopter: The most popular name for Small UAVs, which has 4 rotors positioned on a horizontal plane like a helicopter. Alternate names include Quadricopter and Quadrocopter.

Hexicopter: A multi-rotor aircraft having six rotors. The advantage of the hexicopter is that it can lose any single engine and still maintain control to land.

To help you describe damage, here are some common names for drone parts:

Body Set/Shell – The protective covering that surrounds the drone’s innards.
Controller – The device which directs the drone.

Gimbal – A gimbal is the mount on which a drone’s camera sits, usually allowing the camera to move along multiple axes by remote control. This offers a wider range of angles for the aerial photographer or videographer.

Landing Gear – Landing gear comes in various sizes (tall/short), and is the undercarriage of an aircraft, including the wheels or pontoons on which it rests while not in the air.

LiPo Battery – A Lithium Polymer Battery powers the drone. Specs list flying time (how long the battery will last) without added equipment such as a gimbal and camera, so if your drone has attachments, expect the battery life to be a little shorter.

Prop Guard – fits around the propellers to protect them if the drone bumps into something.

Throttle – A throttle controls the speed of the motors.

Worm Servo – Connects the drone to the landing gear

Whether you fly a drone for business, or it’s just a hobby, you can trust 208 LifeLine Repairs to get your drone working again!